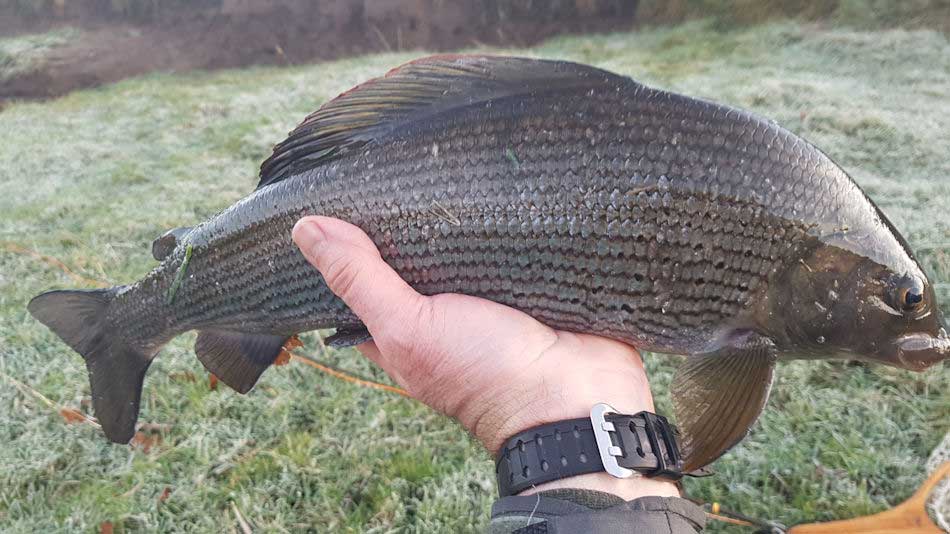 The current Scottish record Grayling, which actually came from the Upper Tweed, is just over 3lb. Grayling up to 3½lb are caught each year and there’s even some local whispers of 4lb’ers. Unfortunately the criteria needed to register a new record Grayling is difficult to meet on the riverbank as Grayling are classed as coarse fish for records. As a rough guide, a Grayling of around 50cm fork length has a 50/50 chance of being a 3lb’er, while one of around 55cm will be pushing 4lb.

Techniques such as Czech and French Nymphing have been designed specifically for fishing flies on the bottom and both are perfect for Grayling. Search for either on Youtube, or a similar website, and you’ll find examples of both.

Nymph patterns are generally best for Grayling, although they really need to be weighted and a size 12 should be considered quite a big fly, by Grayling standards. Most anglers return the Grayling they catch and although there’s nothing wrong with taking the odd fish for the pot, tagging work on the River Tweed has shown that there can be multiple recaptures of individual Grayling in places where there’s any reasonable angling pressure.

Although Grayling are fairly sturdy, due care should be taken whilst releasing them:- the fish should spend as little time out of the water as possible (ideally they should be un-hooked in the water although that’s not always possible) and care should be taken not to handle with dry hands and to avoid any type of squeezing, particularly of the soft belly, as this can result in internal damage and a slow and painful death for the released fish.

Please note that winter grayling fishing is only permitted on certain stretches of the river so anglers are requested to consult the beat map prior to commencing fishing.

Day tickets for winter grayling are also available from our usual outlets.

Remember our Day Permits are available for amodest cost and it is now possible to buy them online. Click on the below button to buy a permit.

Buy a Permit
Page load link
This website uses cookies to improve your experience. We'll assume you're ok with this, but you can opt-out if you wish. Cookie SettingsAccept Read More
Manage consent

This website uses cookies to improve your experience while you navigate through the website. Out of these, the cookies that are categorized as necessary are stored on your browser as they are essential for the working of basic functionalities of the website. We also use third-party cookies that help us analyze and understand how you use this website. These cookies will be stored in your browser only with your consent. You also have the option to opt-out of these cookies. But opting out of some of these cookies may affect your browsing experience.
Necessary Always Enabled
Necessary cookies are absolutely essential for the website to function properly. These cookies ensure basic functionalities and security features of the website, anonymously.
Functional
Functional cookies help to perform certain functionalities like sharing the content of the website on social media platforms, collect feedbacks, and other third-party features.
Performance
Performance cookies are used to understand and analyze the key performance indexes of the website which helps in delivering a better user experience for the visitors.
Analytics
Analytical cookies are used to understand how visitors interact with the website. These cookies help provide information on metrics the number of visitors, bounce rate, traffic source, etc.
Advertisement
Advertisement cookies are used to provide visitors with relevant ads and marketing campaigns. These cookies track visitors across websites and collect information to provide customized ads.
Others
Other uncategorized cookies are those that are being analyzed and have not been classified into a category as yet.
SAVE & ACCEPT
Go to Top